HE Mrs. Majd Shweikeh, Minister of Tourism and Antiquities along with HE Mrs. Véronique Vouland-Aneini, French ambassador to Jordan, and HE Mr. Akel Biltaji, President of the Franco Jordanian Chamber of Commerce and Industry – CAFRAJ, launched the 5th edition of the French Week in Jordan on Saturday 14th of September 2019 during a press conference at the Amman Rotana Hotel.

The French week is an annual “rendez-vous” that celebrates French culture in all its forms. Taking place in the heart of Amman, it aims at highlighting and promoting the strong French presence in the Kingdom. For the past 5 years, CAFRAJ has been organizing this event in collaboration with the French Embassy in Jordan and Institut Français de Jordanie. This year again, it will be taking place every day at The Boulevard, from the 14th till the 21st of September 2019, from 4:00pm to 10:00pm. During a whole week, French expertise, culture and “art de vivre” will be showcased and celebrated through various activities.

France being the first non-Arab foreign investor in Jordan, with a volume of investments amounting to 1.5 billion euros, economy and trade represent an extremely important pillar of the Franco-Jordanian relations. The French week shall highlight this strong bond between the two countries by turning The Boulevard into a “French Marché”, where French companies present in Jordan will showcase their products to the Jordanian audience.

The diversity of exhibiting companies on The Boulevard, which has significantly increased in comparison with last year, reflects the multi-sectorial presence of France in Jordan, ranging from telecommunications, to energy, automobile, cement, aircrafts, shipping, banking, insurance, gastronomy as well as the internationally renowned French cosmetics, fashion and perfumes.

Culture is another main highlight of the French Week. The Boulevard shall embrace a totally French atmosphere allowing Jordanian people to experience a glimpse of Paris, with some iconic monuments of the French capital displayed at The Boulevard : Eiffel Tower, la Pyramide du Louvre and this year’s new addition : le Pont des Arts, a famous pedestrian bridge crossing the Seine river in Paris.

The “French week” is also an opportunity to expose the creativity and the talents of both countries. In that spirit, live concerts showcasing talented local artists will take place every day on The Boulevard at 8:00pm. This year, Institut Français de Jordanie is bringing the French band Nazca, all the way from Lyon, to perform on the stage of The Boulevard on the 20th of September. Both in English and in French, their songs are a unique mix of vocals, guitars, ukulele, keyboard and percussions.

CAFRAJ also supports young talented Jordanians. In this regard, the students and alumni of the Royal Academy for Culinary Arts – RACA will have the chance during the French Week to showcase their culinary skills and bring French tastes and delicacies to the heart of Amman.

Many other activities are on the list of the French Week such as free screenings of French movies subtitled in English at Taj Cinemas, for adults and young audience ; an exhibition of photos and vintage cameras from 1920s ; as well as a contemporary 3D art and jewelry exhibition by the Jordanian artist Dana Rousan who participated last year in Paris Design Week, all taking place at The Boulevard.

This event is organized in partnership with The Boulevard. 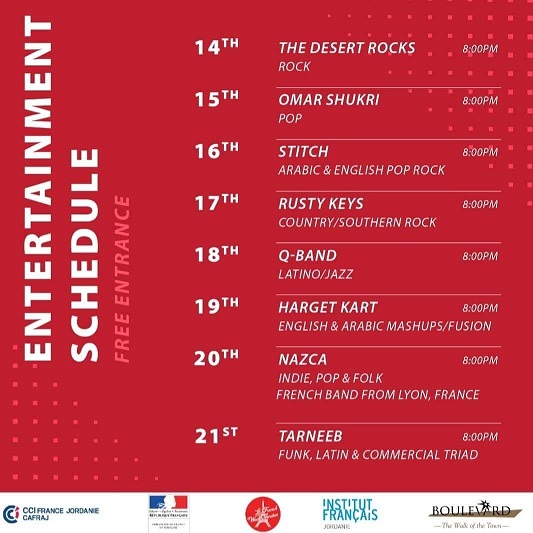 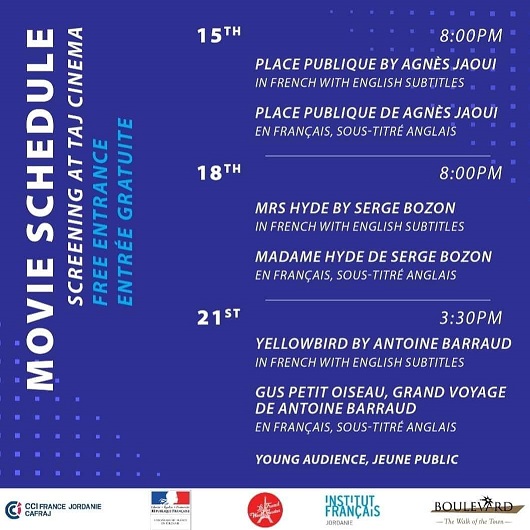